What are Demand Charge Rates?

We have become very accustomed to the electric bill we receive every month. This bill has different charges like sanitation, tax, etc. But the largest charge is very likely to be the electric service charge. Put simply, this charge is what the utility company charges to meet your demand, or the amount of power your home consumes, during that monthly billing period. This is what is known as a standard consumption rate, which could be either fixed or variable. But you probably paid a fixed rate, which means that you pay the same rate for your energy regardless of how much or when you need it.

Fixed rates have been used for a very long time for residential consumers, and are probably the most common rate structure around. However, a different billing policy exists for commercial consumers, one called demand charge rates (DC’s). DC’s are a completely different charge that commercial and industrial sectors have to pay for, along with their consumption rates. A DC can be defined as an extra cost that a consumer has to pay for their maximum demand over a billing period, and can make up around 30% of a utility bill. So, imagine not only paying for the energy you use, but paying more the maximum used at any one time. Kinda lame, right?

Another way to think of this is like turning everything in your house on at the same time. That’s a lot of juice! And the utility will charge for this because they still have to supply you even when everyone is turning on everything at once.

(If you want to learn more about rate design, then check out our article on the ins and outs of rate design! )

Demand charges are designed to lower the cost of grid operation during peak hours of demand. DC’s supposedly help utility companies offset the cost of meeting high peaks of demand, which they have to do at all times, and that can be expensive. Utilities have to meet demand 24/7, and to do so they have to operate a lot of expensive equipment and generation plants.

Utilities argue that DC’s help cover the cost of maintenance and construction of wires, transformers, power plants, substation, etc. DC’s also encourage consumers to have a more consistent demand, with smaller demand peaks offset by spreading demand over a larger period of time.

However, charging the consumer more just because they have a peak demand during any given time is not always the best solution. For example, a business could reach its peak demand in system off-peak hours where the total demand on the grid is considerably less significant than system peak demand hours. This means that a business has to pay more for their energy although they are not costing the utility any more to meet their demand.

You can read our article on the Duck Curve if you want to learn more about demand, peak hour efficiency, and the costs of meeting demand during peak hours!

DC’s have been around for decades in the industrial and commercial worlds respectively, until recently.  The Arizona Public Service (APS) attempted to integrate their residential customers into their Demand Charge policies back in 2016, but was met with frustration and from residential costumers. APS and and regulators were swarmed with public backlash in the form of upset calls and even protest. 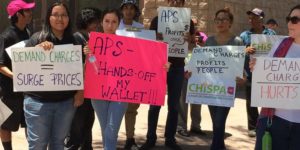 The problem with integrating DC’s into residential districts lies in that individual residential homes, even in their peak demand, do not often put adequate stress on the grid to justify charging more. This stress point usually occurs only a few times per year. Furthermore, residential consumers are not used to being charged this way and frankly many do not understand what the charge is much less how to manage it. Simply put, it requires action by the consumer to manage.

Residential demands and peaks are also very similar. For the most part, we all wake up, shower, and use appliances before we leave for work/school, and we turn on the air conditioner when we return. Commercial and industrial facilities, however, tend to have much more sporadic and instantaneous peaks and demands throughout their billing cycles, especially those facilities operate on a 24 hour basis. Not to mention that these facilities require much larger amounts of power than any given residential home.

APS also made errors in giving proper effort to outreach to consumers of what DC’s really are. It takes a long time, sometime years, to adequately inform every consumer of policy changes. Some people don’t watch TV or have a smartphone, and some do not even have an adequate mailing address. So conducting proper outreach is difficult, but absolutely required.

It is doubtful that APS will be the only utility to attempt to push DC’s on their residential consumers.

A third rate design currently exists in the world of energy, one that we believe to be a healthier, more efficient one. This rate is called Time of Use (TOU). This system is more complicated than the standard consumption rate, so let’s break it down.

Related: 6 Reasons Time of Use Rates Are the Best Option

TOU rate policies work by monitoring energy use during peak demand hours. Peak hours vary slightly from grid to grid, but utilities generally see a big ramp in demand in the morning hours (approximately 6AM-9AM) followed by another ramp that evening (approximately 6PM-10PM).  Consumers under TOU rates would be charged more for using energy during these hours. But, unlike demand charges, time of use rates only apply if you use energy during hours where the grid is at its most stressed, and not just whenever your home meets its own peak demand. Consumers under TOU’s are generally charged less per kWh in the off-peak hours than consumers who are billed through the standard fixed rates. TOU’s give business and homeowners alike the capability to save money by reducing stress on the system by lowering their demand peaks, which in turn saves money for the utilities, as well.

But we like TOU’s for a number of reasons. One being that it gives you the ability and encouragement to work around times of peak demand, and you can even save money by doing so. And who doesn’t like saving money? But it does take some amount of work on the consumer’s part to do. If you usually wash clothes in a dryer and washer or keep the A/C or heat on during peak hours, then try and move those times of usage to non-peak hours.

Furthermore, you can install automatic timers on your water heater and other equipment to only make it run during off peak hours. (Trust us, you’ll still have plenty of hot water). Also, and we love this one, you could install solar panels into your home to lower your demand even more! This would be especially helpful if the the highest charges are during the day with the sun is plentiful. TOUs and committing to these changes could save you hundreds of dollars per year on your electric bills. It’s also worth mentioning that a true TOU system would leave out any unwarranted and extraneous fees. You pay for the energy you consume, when you consume it, period.

TOU’s can not only help you save money, but they also provide real help to the grid. If implemented properly, TOU’s will reflect times when the grid is at it’s highest demand. These times are much more costly for utilities to meet as they have to operate a plethora of expensive equipment to do so. Operation of less expensive equipment = money saved for utilities and you.

Our own Tennessee Valley Authority is proposing TOU’s for utility companies such as Huntsville Utilities, but it’s unknown if they have plans to move TOU’s to their other consumers.